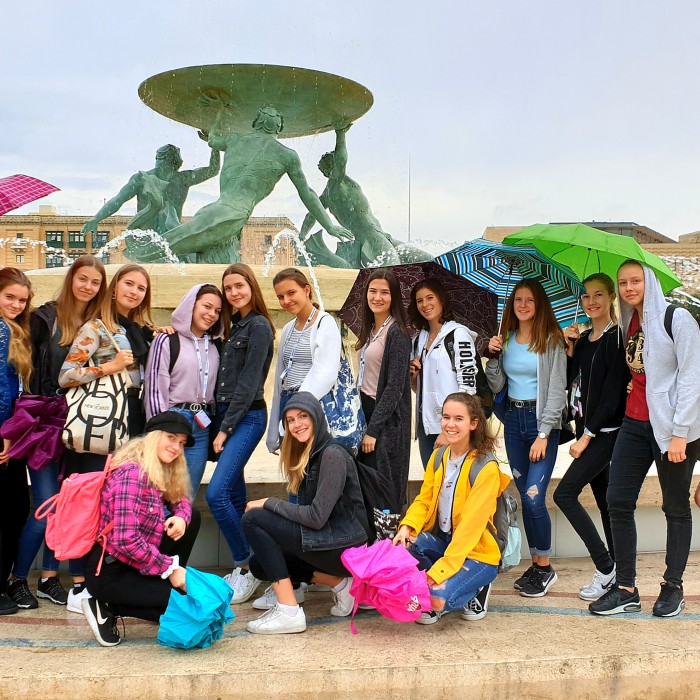 Three islands of the size of Vienna in the middle of the Mediterranean Sea: Colourful fishing boats, gorgeous blue lagoons, historical sights–and usually one of the sunniest places in Europe. Well… usually. But nevertheless – one week, six cities and uncountable never-to-be-forgotten experiences. If you feel like you have just had a little uptick in interest for the Maltese culture, feel free to accompany me on a flashback to one of the most memorable weeks we have ever undergone in our lives.

On Sunday, 6th October 2019, the whole adventure started by going to Vienna Airport at 4 o’clock in the morning (very tiring). After a really long latency time in the check-in area, we finally took off to faraway Malta, for some of us the longest travel distance they have ever covered. Have you ever headed for an island surrounded by literally nothing but water as far as the eye can reach? If you have, you will surely agree with me that this is one of the most staggering views in the world. Having arrived on the main island Malta and having met our host families, we took part in an orientation walk through our borough, St Julian’s, which is a really buoyant and multi-coloured district with many pubs, shops offering little bargains and “The Cake Box” – I swear, I have never seen such delicious-looking cakes in my life before. Well rested and inquisitive towards the following week, we started our programme on the next day by attending lessons at a Maltese language school every morning from Monday to Thursday. In the afternoon, we paid a visit to Valetta, Malta’s capital city, where we experienced, beside the probably most gorgeous historical district in the world, a (according to our tour guide) “real thunderstorm”. Tuesday was reserved for the Dingli Cliffs, Blue Grotto and the fishing village of Marsaxlokk, presumable the best trips of the week even though we were unfortunately not able to enter Blue Grotto by boat due to the bad weather conditions. Did you know that Marsaxlokk is famous for its colourful fishing boats called “Luzzus”? On Wednesday a tour through the ancient Hagar Qimand Mnajdra Temples was next on the list – worth a visit if you are interested in history. Thursday’s programme included both visiting Rabatand Mdina, the “silent city” and former metropolis of Malta with plenty of beautiful contorted alleyways and the official episcopal church of the island – not forgetting that it has also been a filming location of the probably most well-known fantasy series in the world, “Game of Thrones”. In the evening we had to split up into groups for a selfie-challenge straight through St. Julian’s. The first three groups to finish taking selfies in front of the asked places were promisedsome reward. Last but not least, on Friday we went to Gozo, a smaller island close to Malta with the impressive bastille “Citadella”, a boat trip across the Dwejra Bay and, finally, some spare time at the beach where we could relax a bit before packing up our luggage for the homeward journey on Saturday.

In my opinion, spending a week abroad with your classmates always has many benefits as you really must rely on each other in order to get one’s bearings in a foreign city you don’t know. You also end up with many memories you will remember your whole life, not to mention how such a school trip improves your language skills and your ability for taking responsibility for your actions.

My most memorable moment in Malta is not easy to define as we all experienced plenty of magnificent moments during this week, but I would say it was the moment when we went through Dwejra Bay by boat. It was an ineffable feeling to be out there on the ocean, surrounded by giant cliffs and waves so high that we sometimes lost touch with the water.

If you have never been to Malta, I would definitely advise you to book a flight in order to explore the Maltese culture because words can’t describe how I felt about leaving a place which felt like the heaven on earth for me. Malta – għal dejjem f’qalbna… forever in our hearts. 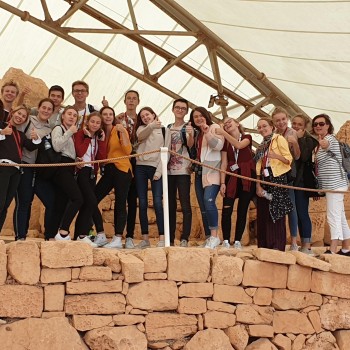 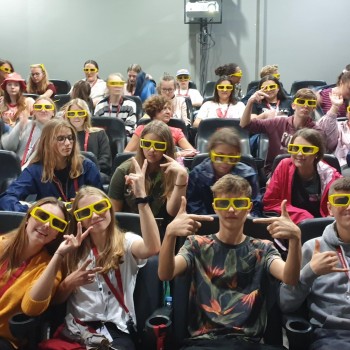